There are several basic methods for determining the location of a point. To locate points accurately, the anatomical landmarks on the body must be used. To locate points that are not on landmarks, the distance between any two landmarks may be converted into proportional units, or cun; this is known as ‘point location according to proportional bone measurement’. Measuring cun with fingers is also acceptable; this is known as ‘point location using body-cun measurement’.

Location of Points According to Natural Body Landmarks

The anatomical landmarks used to locate points include bones and muscles and can be divided into fixed and moving markers.

Fixed anatomical landmarks include the five sensory organs, hair, nails, nipples, umbilicus, and the prominences and depressions of bones and muscles. Obvious landmarks may be used directly to locate points. For example, DU 25 (sù liáo) is situated on the tip of the nose; yìn táng (EX-HN 3) is between the eyebrows; RN 17 (dàn zhōng) is between the nipples; ST 25 (tiān shū) is two cun lateral to the umbilicus; GB 34 (yáng líng quán) is anterior-inferior to the capitulum fibulae; DU 14 (dà zhuī) is under the spinous process of the seventh cervical vertebra. Some points are situated at the bifurcation of two bones. LI 16 (jù gŭ) is located at the bifurcation of the acromion process of the clavicle and the scapular spine; RN 16 (zhōng tíng) is on the bifurcation of the costal cartilage and the lower border of the xiphoid bone.

Moving landmarks refer to the depressions and folds on the joints, muscles, and skin with reference to specific body movements. SJ 21 (ĕr mén), SI 19 (tīng gōng), and GB 2 (tīng huì) are located with the mouth open; ST 7 (xià guān) is located with the mouth closed. LI 11 (qū chí) is found on the lateral side of the transverse crease when the elbow is bent; LI 15 (jiān yú), in the depression anterior and inferior to the acromion process when the arm is abducted; LI 5 (yáng xī), in the depression between the muscle tendons of the extensor pollicis longus and the extensor pollicis brevis when the thumb is raised; SI 6 (yăng lăo), in the bone cleft radial to the capitulum ulnae when the forearm is adducted.

The anatomical landmarks on the body, especially the fixed landmarks, are invariable. Therefore locating a point using these landmarks is the primary and most accurate method. But not all points are situated near such landmarks; this method has limitations.

Proportional bone measurement involves using landmarks-bones and joints-to measure the length and size of certain body parts for conversion into proportional units that become the bases for locating points. This method was first recorded in The Spiritual Pivot (Líng Shū, 灵枢). Proportional measurement is based on an individual’s own body: the length of a given bone or the distance between two joints is divided into equal units, each considered to be one cun. This method applies to patients of both sexes and all age groups and body types. The proportional measurements of different parts of the body are shown in Table 2-7 (Pic. 2-1). 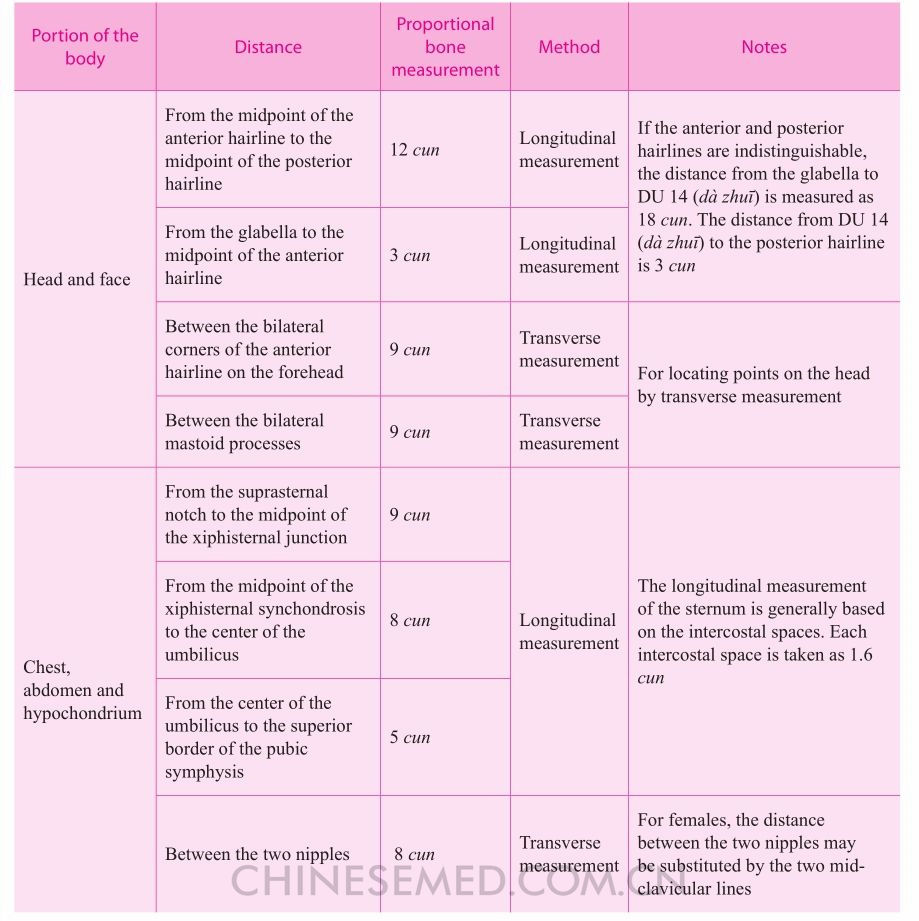 Proportional bone measurement is an extension of anatomical landmark measurement and supplements the latter. It is considered an accurate point location method; it is often used clinically and is widely applicable for most points.

In body-cun measurement, points are located using the length and width of the patient’s fingers as standard units. Commonly used finger measurements are middle finger, thumb, and finger-breadth cun.

When the patient’s middle finger is bent, the distance between the two ends of the creases between the two interphalangeal joints at the radial side is taken as one cun (Pic. 2-2). Compared to the proportional bone cun, the middle finger cun can be slightly longer. This should be kept in mind when using it for point location.

The width of the interphalangeal joint of the patient’s thumb is taken as one cun (Pic. 2-3). Compared to the middle finger cun measurement, this method is clear and simple, and it is a commonly used point location method.

When the patient’s four fingers (index, middle, ring and little fingers) are touching and extended, the width of the four fingers at the level of the crease of the proximal interphalangeal joint of the middle finger is taken to be three cun (Pic. 2-4). This method is also commonly used in clinic.

Simplified measurement is another point location method. For instance, when the index fingers and thumbs of both hands are interlinked with the index finger of one hand in an outstretched position, LU 7 (liè quē) is under the tip of index finger; when a loose fist is made, PC 8 (láo gōng) is just under the tip of the middle finger; when the patient stands straight with hands at the sides, GB 31 (fēng shì) is where the tip of the middle finger touches the leg; when the shoulder is dropped and the elbow bent, LV 13 (zhāng mén) is located at the level of the tip of elbow joint. DU 20 (băi huì) is situated at the center of the line between the ear apexes. Simplified measurement is usually employed as an auxiliary to other methods of point location.