The Introduction of Cough

The Etiology of Cough

(1)Dysfunction of other organs affects the Lung

The Pathology of Cough

How to Diagnose and differentiate Cough(see Table 22)

Differentiate syndromes with the chief complaint

In general, quiet cough is deficiency and loud cough is excess. 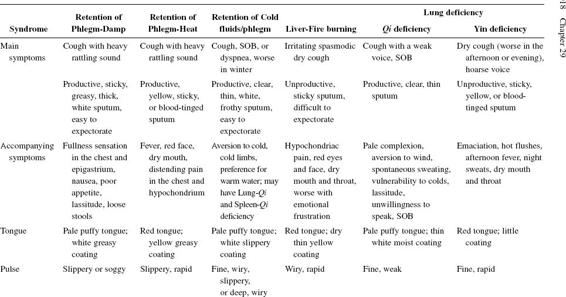 (3)Quality of the voice

The Treatment of Cough

Determine exogenous or endogenous cough first, in order to understand the pathology.

Rotate the four groups for chronic bronchitis or asthmatic cough.

Light tapping once per day.

Exogenous cough is generally easy to cure, although if it is combined with Damp or Dryness it is not as easy to cure and is more likely to linger and develop into endogenous cough.

Lung-Yin deficiency looks mild at the beginning (usually just a single cough at night), but it easily lingers and becomes increasingly aggravated over time. This pattern can eventually combine with pulmonary tuberculosis.