refers to the four properties and five flavours of Chinese medicines.Gui jing

refers to the direction where the drugs are taking effects.

This refers to the four properties of Chinese medicines. Known also assi xing

, they are the cold, hot, warm and cool nature of medicines. Besides the four properties, there is also mild nature (ping xing

), a term used when it is unclear whether the medicine has a cold, hot, warm or cool nature, or if it has a mild effect.

This refers to the authentic flavour of the medicine and food. Also known as the tastes of Chinese medicines, they include sour, bitter, sweet, pungent and salty, which are the five basic flavours. They are usually called “the five flavours of medicines”. Actually, there are more than five flavours of medicines and food, e.g. mild-flavoured, and astringent. The latter is classified as a sour flavour, while the former is considered to be a type of sweet flavour. 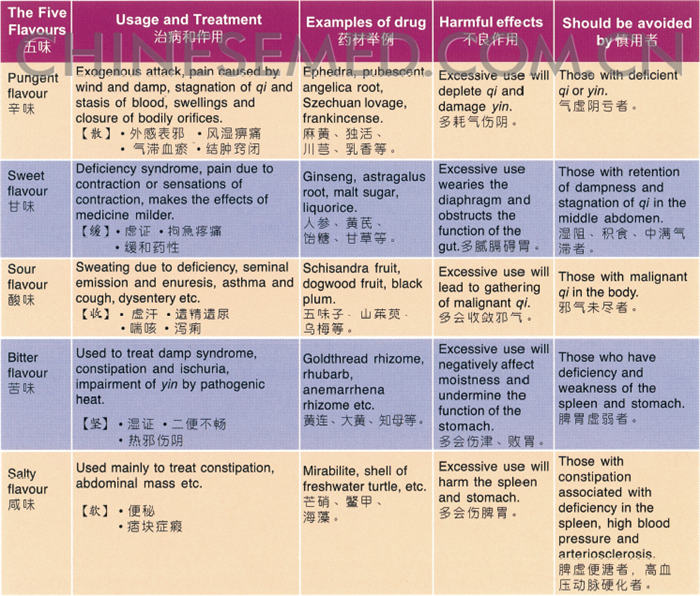 About the “five properties (wuxing )

was the person who first mentioned the “five properties (wuxing

)” of Chinese medicines, namely the cold, hot, warm, cool and mild natures. As the mild property is considered to be subjective, the term “four properties (siqi

)” has been used in the pharmaceutical field to the present day.

The meridians through which the therapeutic action of drugs is manifested. This is known as meridian tropism (gui jing

is the classification of drugs according to their effects. Jing

thus enables us to improve the accuracy with which we apply medicines.

This refers to the direction of the action of drugs.

, which means ascending, refers to drugs with an upward effect, used to treat illness of descending condition.Jiang

, which means descending, refers to drugs with a downward effect to treat illness of ascending condition.Fu

, which means floating, refers to drugs which have an outward effect to cure external illness.Chen

, which means sinking, refers to drugs having an inward effect to cure internal sickness.

The Direction of Medicinal Action

” or “herbs for meridian guiding

grouped under both the spleen and lung meridians. This implies that the herb can replenish both lung and spleenqi. Liquorice

are able to pass through 12 meridians. Yet other Chinese medicines are not classified under any meridian, but can guide other medicinal materials to enter certain meridians. These herbs are called “herbs for meridian guiding(yin jing yao

can guide medicines into the heart meridian.