The Introduction of Asthma

A common illness characterized by repeated attacks of paroxysmal dyspnea with wheezing. It is called Xiao Chuan in TCM. “Xiao” means “asthma” and “chuan” means “dyspnea.”

In most patients, an asthma attack begins with a nonproductive cough and wheezing, usually followed by tightness in the chest and dyspnea. Attacks frequently occur at night and during sleep. They usually do not last longer than several hours, and resolve spontaneously or with therapy. The end of an attack is usually heralded by a change to a productive cough with expectoration of mucous plugs and casts.

The Etiology of Asthma

The Pathology of Asthma

Phlegm is the chief pathological factor and serves as the “hiding root” for asthma. Without Phlegm, an asthma attack will not be triggered. Phlegm may come from Spleen, Kidney, and Lung Pathology

Phlegm, water retention, and Dampness all result from abnormal water metabolism and have the same nature.

The chief organ is the Lung, but the Spleen and Kidney are also related.

Phlegm mixed with Qi blocks the air passage and impairs the dispersing and descending functions of the Lungs.

In senior patients, Kidney-Qi naturally declines. So, for these patients, asthma is very difficult to cure but it can be managed.

In adolescent patients the prognosis is better, because Kidney-Qi continues to increase until age 28 in females and age 32 in males. Therefore, asthma may be curable in these patients.

Herbal therapy in the non-attack stage is very important, in order to decrease the frequency and severity of asthma attacks. 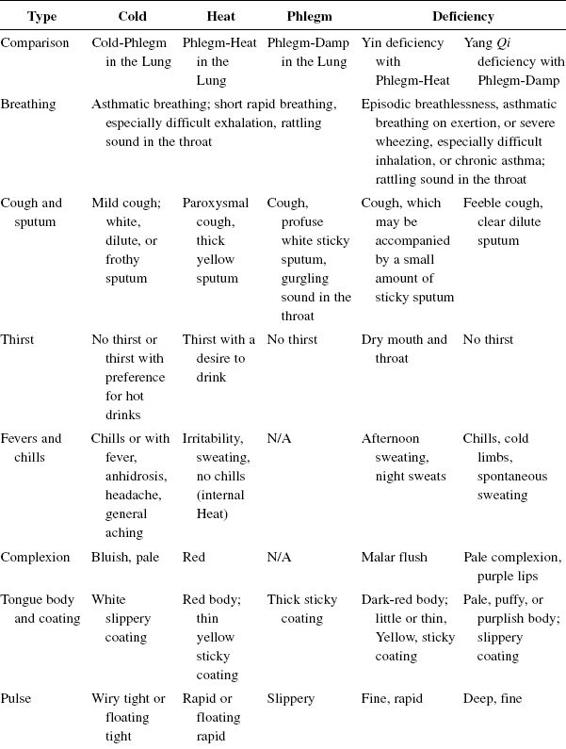 For deficiency, determine whether it is Yin or Yang deficiency and which Zang-Fu organs are involved. Yang-Qi deficiency usually involves LU, SP, KI, or sometimes HT.

The Treatment of Asthma

(2)During the remission stage

(1)Excess type (during an attack)

Hand Taiyin, Hand Yangming, and CV Meridians are chosen. Use the reducing method. Moxa is added for the Cold type.

Hand Taiyin Meridian, Back Shu points are chosen. The tonifying method and moxa are applicable.

Dr. Lintai Xu said, “There is no cure for asthma without moxa.”

One treatment for asthma that is used in China involves scarring moxibustion over a three-year time frame. Each year, one treatment is done in the summer.

Use nine units of moxa per point and burn down completely.

Get the powder form of these herbs and mix them together. On a hot day in summer, mix ginger juice and these herbs to make a paste. Apply the paste to BL 13, BL 43 or Bailao for 1–2 h. The patient will normally feel a warm or comfortable burning sensation.

During remission, tap on:

See the charts titled “During an Asthma Attack” and “During the Remission Stage.”

Patent medicines used over the long term can also help to improve the constitution. They are especially good for treatment during the remission stage.