When diagnosed and treated by a Chinese physician, patients will often be issued a list containing unfamiliar terms for medicines and foods. This list is known as a Chinese medicinal prescription or fang ji

(which is short for yi fang

), refers to the physician’s prescription; ji

in the ancient Chinese context, refers to making up a prescription or tiao ji

is written after examining the cause of illness based on syndrome differentiation and the treatment method decided. Suitable medicines in appropriate dosage are chosen based on constitution principle, and observing appropriate herbal compatibility (peiwu

). Fang ji is one of the main tools used in treatment based on syndrome differentiation (bian zheng lun zhi

The principles of composing herbal prescriptions

The principles of composing herbal prescriptions

were first set out in the Internal Classic

. During the Yuan Dynasty, Li Gao

also mentioned these principles in The Theory of Spleen and Stomach

) refers to the medicine that provides the key remedy for the main illness. It has the strongest effect among all herbs in a prescription.

) is an auxiliary medicine that serves to strengthen the curative effects of the monarch medicine on the main illness. It may also be used to treat accompanying illnesses or symptoms.

) come in three types. The first one is zuo zhu yao

which works with monarch and minister medicines to enhance the curative effects and directly treat the secondary symptoms. The second kind of adjuvant medicine is zuo zhi yao

which removes or reduces the toxicity of monarch and minister medicines, restricting their stronger properties. The third one is fan zuo yao

which directly opposes the taste properties of monarch and minister medicines, but complements them in terms of effects. Fan zuo yao also helps to prevent the body from becoming resistant to medicines. It is usually prescribed in small dosages.

) come in two kinds. One is medicine for meridian guiding (yinjing yao

) which directs other medicines to the area where the illness lies. The other is harmonising medicine (tiaohe yao

) which acts to harmonise the ingredients of a herbal prescription. 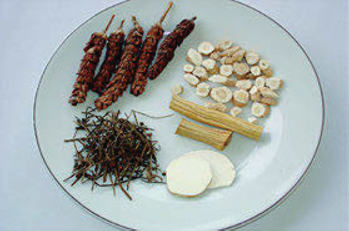 which was discovered in the Han tomb of Mawangdui at Changsha. It recorded 283 clinical prescriptions and also the earliest preparation form of ready-made medicines such as pills and powder.

, held to be the ancestor of medical formulary